How to Overcome the Goliath in Your Life 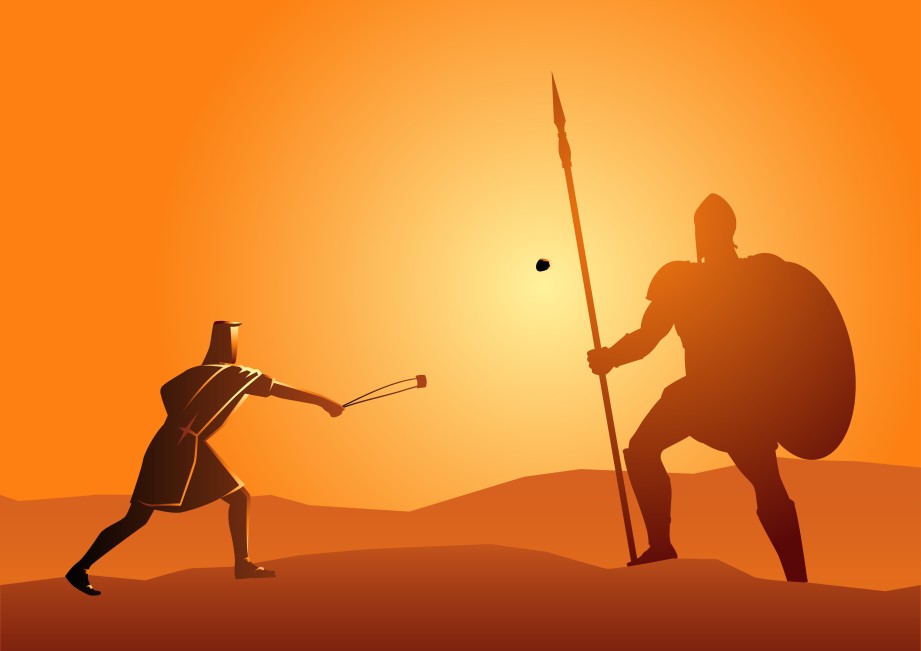 If you grew up attending church functions, you probably heard the story of David and Goliath. If you are new to church attendance, let’s briefly set the scene. David was nothing more than a shepherd at this point. A teenage shepherd at that. His older brothers, who the Bible says were all stronger, better looking at seemingly more fit for battle had joined King Saul’s army and were off at war. Their foe? The Philistines.

The Philistines were not a normal army. In fact, they were an army of giants. Their “champion,” the strongest warrior in their army was a man named Goliath. Based on the information we have in Scripture and the historical data that covers Biblical measurements, we know that Goliath was somewhere between 9’6” and 10’ tall. Every morning and every evening, Goliath would come out of his tent and taunt the Israelites. David’s brothers (along with the rest of Saul’s army) were terrified. So terrified that when Goliath would come out, they would hide in their tents. It wasn’t until an untrained, unarmed, perhaps unwitting David delivered some supplies to his brothers that someone had the courage and faith to challenge the giant.

All of us have a giant in our lives. Each of us, if we’re being honest, have something that seems too large and too powerful for us to overcome. The story of David and Goliath is much more than another underdog story. This isn’t a story about an undermanned sports team overcoming a favored opponent. No, it’s a story about one of God’s children tackling something that was exponentially larger than him. With that in mind, the story of David and Goliath provides us with a beautiful example of how we can overcome the Goliath in our lives.

Relying on the Blood of Christ
1 Samuel 17:1 (ESV)
Now the Philistines gathered their armies for battle. And they were gathered at Socoh, which belongs to Judah, and encamped between Socoh and Azekah, in Ephes-dammim.

In ancient times, the name of a particular place was incredibly important. “Ephes-dammim,” the area that separated the Philistines from the Israelites name is especially meaningful. Literally translated, it means “the boundary of the blood.” Why didn’t Goliath simply march across the area between Socoh and Azekah? Because there was a boundary that prevented it, the boundary of the blood.

To get a better understanding of what this means for you as you face your giant, let’s look at a verse from Revelation:

Revelation 12:11 (ESV)
And they have conquered him by the blood of the lamb and by the word of their testimony, for they loved not their lives even unto death.

The first step to defeating your giant is to simply hide yourself in the blood of Christ. John 3:16 says that the shed blood of Christ was the result of God’s love for all of humanity. When we know that our Champion, our undefeated Heavenly Father loves us with such fervor, we can rest in the fact that He will not let our giants defeat us. If your giant is taunting you, rest behind the boundary of the blood that saves you, keeps you and delivers you the victory that you need.

The Power of Praise
1 Samuel 17:34-36 (ESV)
But David said to Saul, “Your servant used to keep sheep for his father. And when there came a lion or a bear, and took a lamb from the flock, I went after him and struck him and delivered it out of his mouth. And if he rose against me, I caught him by his beard and struck him and killed him. Your servant has struck down both lions and bears, and this uncircumcised Philistine shall be like one of them, for he has defied the armies of the living God.

Why wasn’t David afraid of Goliath? Because David had a history of fighting against foes that should have destroyed him. He recounted to Saul how lions and bears had taken his sheep. David didn’t sit back and mourn his loss. Instead, he chased the wild animals down, caught them and reclaimed what belonged to him. If those animals tried to kill him, he grabbed them and killed them instead. Giants are scary, but a hungry lion is scarier. David was confident in God’s power because he had already seen it at work.

One of the best ways to encourage yourself in the face of a giant is to look back at the times in your life where God delivered you. We just read Revelation 12:11 where it talks about the blood of Christ defeating our enemy. What else did it say defeats him? “The word of our testimony.”

When we embrace what God has done in our lives in our past, we are able to fully entrust Him with our present. David wasn’t scared of Goliath because he knew about God’s power. We can rest in the same fact. In order to defeat today’s giant, take some time and praise God for yesterday’s victories.

Give Up
1 Samuel 17:47 (ESV)
And that all this assembly may know that the Lord saves not with a sword and a spear. For the battle is the Lord’s, and he will give you into our hand.

It may seem counterintuitive to give up the battle, but the third and final key to defeating your giant is to realize that you can’t defeat your giant. That flies in the face of our own commitment to self-sufficiency, but David didn’t defeat Goliath. God defeated Goliath through David.

David went into battle armed only with a slingshot and five smooth stones. What good was that going to do against a giant who wore armor that outweighed David on its own? In David’s hand, it wouldn’t do much. But when David handed the battle over to the Lord, that slingshot and a single rock turned out to be a weapon of mass destruction in its own right.

Giving up the battle doesn’t mean that you accept defeat. Instead, it means that you understand that your giant is too big, too strong and too powerful for you to defeat on your own. You can stand victorious over your giant, but it will be because God fights the battle. He simply allows you to enjoy the victory.

To fast forward to the end of the story, David put a single stone in his slingshot, launched it toward the giant and sank it into his forehead. The giant fell down and David pulled Goliath’s sword from it’s sheath and chopped the head of the giant off. From that point on, David’s life was never the same. Why? Because he had defeated his giant.

All of us have giants, and they all look different. You probably don’t have a 10-foot-tall Philistine taunting you, but maybe your giant looks like an addiction to drugs or alcohol. Maybe your giant is hurt and bitterness from a parental figure who didn’t love you like he or she should. Maybe your giant resembles a past that has been marked by bad decisions, regrets and shame. Whatever form your giant takes, you can apply these three principles to bringing it down. Your Goliath does not have power over your life. You are a victor, not a victim. Destroy your giant and live in the victory that God provides to His children.

A Closing Prayer:
God, I know that this giant is too big for me. Remind me of the protecting power offered by Your blood. Help me to remember the times in my life where defeat has seemed imminent before You intervened and gave me the victory. Most of all, give me the courage that I need to turn this battle over to You. This battle is not mine, it’s Yours. God, you know the size of my giant and the fear that I experience in its presence. But I know that You give me the victory. In Christ’s name, Amen.

Battles Fear Giants Goliath
24296
73
Share
We use cookies on our website to give you the most relevant experience by remembering your preferences and repeat visits. By clicking “Accept”, you consent to the use of ALL the cookies.
Do not sell my personal information.
Cookie settingsACCEPT
Manage consent